Major Stages In The Life Cycle: 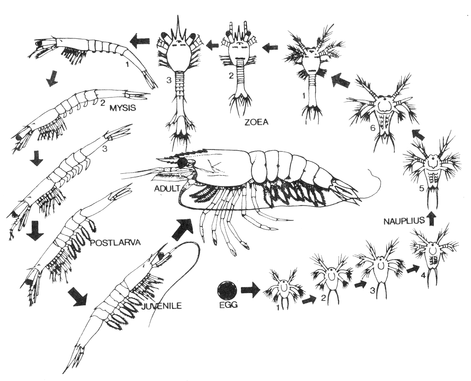 Shrimp Eggs: The shrimp start as small almost invisible eggs and are food to zooplankton until they spawn due to becoming stimulated by temperature change and become larvae.
Nauplius Larva and Protozoea Larva: Larvae developed from fertilized eggs.  They cannot control themselves at this stage in the life cycle but still interact with other species as consumers and as food throughout the water column.
Mysis Larva: These are carried toward shore and continue to feed on zooplankton and phytoplankton.  Mysis larva seem to react to light since they swim down away from the water column and predators.
Postlarva: These tend to be moved toward brackish waters and begin to look, forage, and graze like shrimp.  They develop swimming and walking legs.  They forage for worms and decaying animal parts, while also being food for fish, playing a vital part in the food web.
Juveniles: They can continue to interact with many species as predator and prey.  They move farther into estuaries to satisfy their hunger, creating a bigger impact.  Eventually it will turn toward the sea.
Subadult: Temperature changes stimulate growth and regulate its migration to sea.  They tend to feed on the bottom and many are harvested at this age.
Adult: Continues to grow on the sea bottom. Many are fed on by animals such as pinfish, silver sea trout, sharks, and redfish and snared by commercial trawlers.  A few will survive long enough to reproduce when an increase in the water column’s temperature will stimulate the females to spawn, producing thousands of eggs to begin the cycle again.
Powered by